Astonishingly, in 2012, despite a century of women’s emancipation, and the triumphant upsurgence of feminist theatre in the 60s, 70s, and 80s, Mama Quilla is one of a tragically shrinking number of theatre companies in the world that aim to specifically represent the female viewpoint on current world political issues.

Mama Quilla’s first three major productions, THE BOGUS WOMAN, BITES, and BONES, were all performed at The Bush Theatre and published by Oberon Books.

The Mama Quilla Initiative was launched by Kay Adshead and a company of ex-acting and creative students of the City Lit. Operating as a pod inside the company, Mama Quilla, its aim is to create and perform rapid-response theatre, producing original, innovative, mixed-media performance responding to the times and to provoke debate. Initially, it aims to create seed or workshop productions some of which will be further developed.

Performers create a fixed repertory company but actors outside the core team may be invited to join the company for specific projects. The Mama Quilla Initiative has its own fixed creative/technical team and its own Workers’ Board.

The Mama Quilla Initiative was launched in April 2011 with a 10-minute platform performance, WE WOMEN SPEAK THE WORDS OF ORDINARY LIBYANS. Devised from verbatim accounts from Libya and performed in the foyer of The Broadway Theatre, Barking, it was a short companion piece to IF ANYONE RECOGNISES THESE YOUNG PEOPLE…, which was devised and directed for 30 young East Enders inspired by the student protests against tuition fees, December 9, 2010.

THE WOMEN’S SPRING and THE SINGING STONES, developed from WE WOMEN SPEAK THE WORDS OF ORDINARY LIBYANS, were performed as part of the inaugural Mama Quilla Initiative debut event THEATRE OF PROTEST. They performed to a sell-out audience at The Roundhouse, January 15, 2012. The event involved over 90 performers and a team of 15 creatives, with 9 new commissions including one Live Art piece from Mark Civil and two short films, STONES made by Sarah Auber and Simon McCabe, and UNTITLED made by Lise Marker and Heide Hasbrouck.

THE WOMEN’S SPRING and THE SINGING STONES will be rewritten and developed further for a reworked production in 2012/2013 as a double bill integrating specially commissioned film fragments and animation.

Posted by discussionsonfilm at 17:21 No comments: 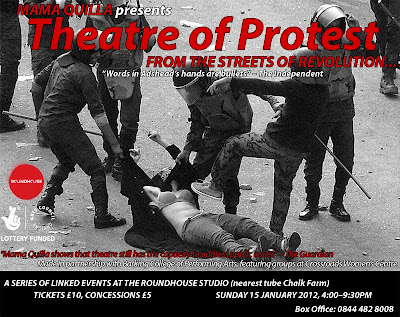 “The author wants to convene a public inquiry into the workings of the whole planet…well, why not?” – The Times on Kay Adshead’s BITES at the Bush.

Since December 2010, award-winning writer Kay Adshead, for Mama Quilla, has been creating performance out of the protests here in the UK and abroad.

On Sunday 15 January 2012, for one night only, these pieces will be put together in a series of linked events at The Roundhouse from 4:00–9:30PM.

Audience, casts and theatre-makers are invited to meet each other and talk.

“Adshead is that rare species, a socialist feminist who believes in fun as well as getting the politics right” – Tribune

Pauline Flannery attended a day of protest-exploring theatre presented by woman-led human rights company Mama Quilla at the Roundhouse. She tells us her thoughts.
The flame-red hair has changed to the colour of autumn leaves, all the richer for that, yet theatre practitioner Kay Adshead flits in and out, quietly orchestrating events at Mama Quilla’s presentation of the Theatre of Protest, from the Streets of Revolution staged at The Roundhouse last Sunday.

A soundscape which speaks of her vintage; T Rex’s "Children of the Revolution", Thin Lizzy’s "Dancing in the Moonlight" and The Rolling Stones, accompanies a simple set made up of a table and chairs covered in the same placards which are strategically placed around the auditorium: we are in the theatre of protest. So while The Iron Lady plays the cinemas, the iron lady of Thatcher’s Women brings about a revolution of her own.
Since 2010, Kay Adshead under the aegis of Mama Quilla has been creating performance pieces out of real protests and all the dramatic works seen at the Roundhouse were ‘workshop or seed productions.’ So here form gets to mirror content and the process is all the more invigorating for it.
First up, thirty people dramatised events around the student protests in Westminster on 9 December 2010 against tuition fees:

4:00PM – IF ANYONE RECOGNISES THESE YOUNG PEOPLE…?

Made at Barking College of Performing Arts, with 30 young East Enders, it dramatises events around the student protests on 9 December 2010 in Westminster, as the English Parliament voted to increase tuition fees.

While in the liberal press, the student protests were described as “a generation finding its voice”, prior to our production, only 12 out of a cast of 30 Barking students said they were likely to vote in a general election in the UK. They believed “the student protesters were probably all rich”.

...with cross-cut scenes, overlapping commentary and an ensemble cast, in which an autistic boy finds his voice while his family (some for the first time) take to the streets. Accompanied by projections of the real December protest with the silent remonstrations of the politicians, it is a theatrical contrivance that works. The visual material has an immediate impact because of its shared memory, while the soundless articulation of the politicians appears hollow; summed up in one line ‘it’s a people thing.’
5:15PM – THE WOMEN’S SPRING

Beyond verbatim, inspired and informed by real accounts, this new short piece explores what the women of the Arab Revolution might have said. It is performed for Mama Quilla by Arinda Alexander, Sarah Auber, Tina Gray, Jennifer James, Jody Jameson, Rus Kallan, Eugenia Low, Margery Mason and Vivienne Rochester.

5:45PM – CHORUS WORKSHOP
A 15-minute chorus workshop, open to all, will create a minute of theatre to be performed on the day.


An open discussion on overcoming injustices with participation of groups based at Crossroads Women’s Centre. These groups include All African Women’s Group, Black Women’s Rape Action Project, English Collective of Prostitutes, Global Women’s Strike (GWS) and Women of Colour in the GWS, Payday Men’s Network, Single Mothers’ Self Defence, Women Against Rape, and WinVisible (Women with Visible and Invisible Disabilities). The Crossroads Women’s Centre in Kentish Town provides a home to over 15 organisations, projects and services. It was named after the brave women of the squatter town of Crossroads, South Africa, who refused to be moved, keeping alive the struggle against apartheid through the hardest times. Fundraising is underway to complete refurbishment by end January 2012 of a larger Centre nearby.

A film by members of the initiative inspired by the events of 2011
A specially commissioned 5-minute short presents notes from the global protests as observed by a child.

8:50PM – WORDS FROM THE STREETS
Video live streaming from St Paul’s brings us up to date on Occupy London.

9:05PM – CHORUS
This will be the performance of the piece made in the Chorus Workshop earlier in the evening.

“You have to believe that like everything else you grow and you can nurture things. In the end I suppose for me theatre is a place, a gathering, where we come together to celebrate, to debate, to argue, to reveal…” – Kully Thiarai, interviewed in “Staging New Britain”

“Dialogues are happening now between telly executives and writers to create a ‘sexy’ TV series about the English riots, and exploring those dialogues will quite possibly be Mama Quilla’s next piece” – Kay Adshead


The experience ended with The Singing Stones, a revolutionary fairytale, written by Adshead, performed by the compelling Sarah Nile and directed by Kully Thiarai. In the piece, a woman is condemned for singing in a public square at night on the spot where her husband had died. The dramatic switch comes when the narrative changes from the third to the first person; thrilling.
For the auburn-headed Adshead, who chivvied and encouraged till the end, you wonder how she keeps the fire in her belly. The answer: by believing ‘the only struggle you lose is the one you give up.’ It’s twenty five years since she wrote Thatcher’s Women. Now she gives a voice and a platform to a new generation, empowering them to be loud, proud and strong.

During the events, film maker Lise Marker will be shooting footage to create a new short film exploring protest.


Trained as an actor at the Royal Academy of Dramatic Arts (RADA).

Awards include: Fringe First, Adelaide Best Play of Fringe and Sensation Award (all for 'The Bogus Woman'), Calouste Gulbenkian Award for Performance Poetry (for 'The Slug Sabbatical'), Peggy Ramsay Award and Arts Council Theatre Writing Bursaries; nominated for an EMMA and three times for the Susan Smith Blackburn Award.


Awarded an Arts Council/Mercers Company Bursary as Trainee Director in1990/91.


Mama Quilla credits: 'The Women's Spring'. Other theatre credits include: 'Twelfth Night' & 'Dido Queen of Carthage' (British Council tours), 'Macbeth', 'Restoration', 'The Rover', 'Kissing the Pope', 'The Maids' (all for the Royal Shakespeare Company), 'Hobson’s Choice' (Birmingham Rep), 'A Mouthful of Birds' (Royal Court). Screen credits include: 'Casualty', 'Down to Earth', 'Men of the Month', 'Public Eye' (all for BBC TV), 'The Bill' (Thames TV), 'Without Motive' (HTV United Broadcasting).

Trained at the Central School of Speech and Drama. MA in Applied Theatre.