THE SINGING STONES REVIEWS then …. 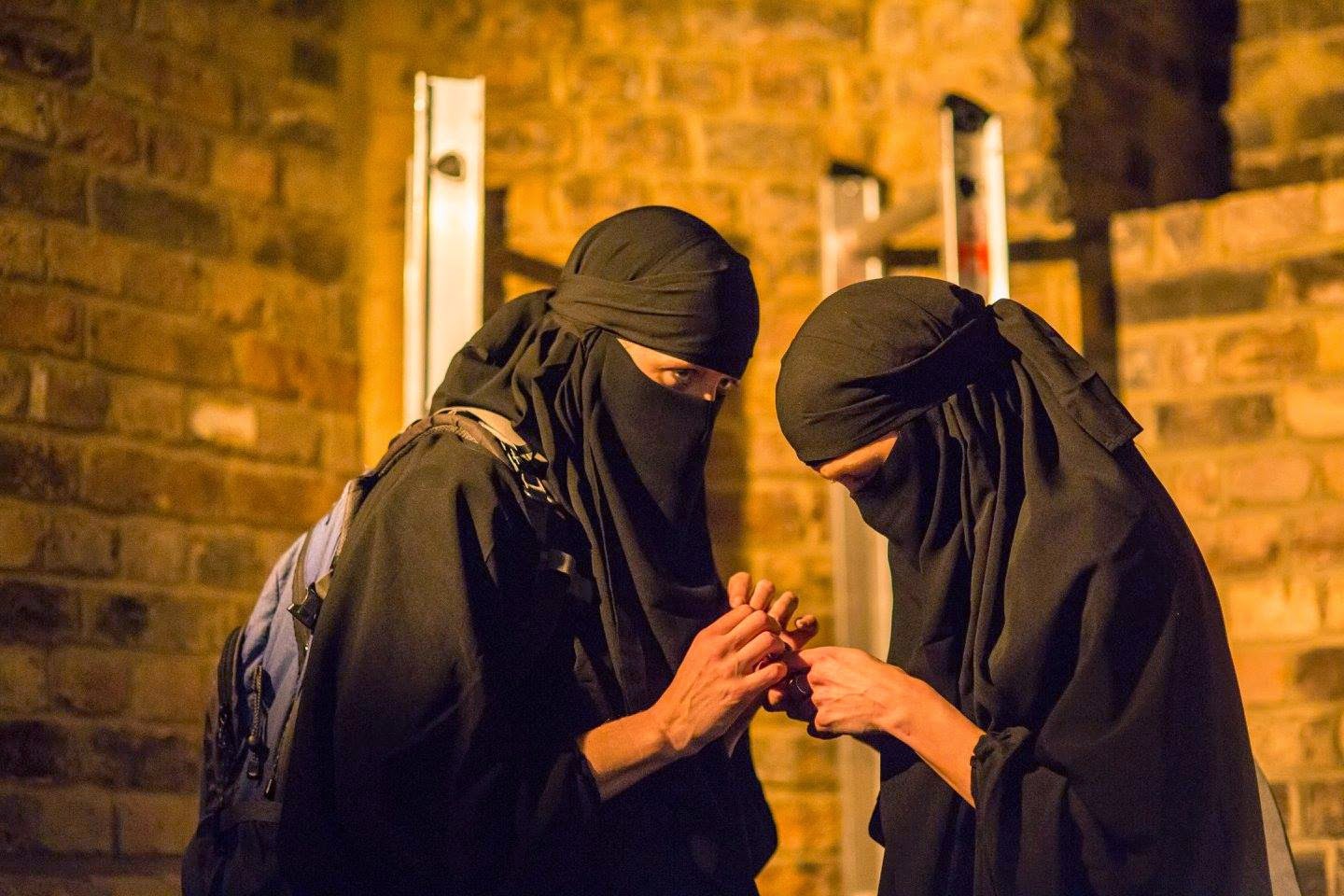 The two veiled girls that meet on the border between two un-named Middle Eastern countries seem to have stepped straight out of familiar news reports of Tower Hamlets radicalisation and onto the Arcola stage, the girls debate with other hopeful, fleeing migrants about what awaits them on the other side of the border.  Adshead’s writing reveals the logic and the tragedy of such girls, ones who are fiercely intelligent yet naively trusting of their future influence over the Jihad they are joining and its fighters who they will be wedded to.

The play The Singing Stones, which is presented as a series of three shorter plays, has many such female characters, who we recognise from reports of the Arab Spring and news of conflicts such as the Syrian war that are a consequence of that heady time in 2011. It is Adshead’s ability to stage current events sensitively and incisively that gives the piece its immediacy and power. The final hopeful play, in a magical realist style, tells of a singing woman, captured by the authorities in Cairo’s Tahrir Square and who, after silently undergoing a brutal period of torture and degradation, at the public inauguration of her captor’s election campaign gives birth to a girl, one of the next generation of Arab women, and at the same time (out of her mouth) to a flock of singing birds. This play, the final and most moving of the three, is written with Adshead’s hallmark poetic vision where the feminine voice has the potential to transcend the brutality and complications of politics.

Kay Adshead, as always, is concerned both with the immediate political situation overseas and how it impacts on imaginations at home.  This piece attempts to draw out the many and varied lives of people caught up in the conflicts over self determination, hopes for democracy and struggles with the East/West dichotomy that have come to a head in the Arab world. One incisive and ironic scene shows the meeting of a richly multicultural group in Camberwell who are making a misguided attempt to produce a play about the Arab Spring.  Here Western voyeurism and parasitism are exposed in a way that shows the play we are actually watching to be fully engaged in the politics of representation; the multicultural cast, at the same time as grappling with the difficulties of how to represent women’s actions from a distance, reflect our state of globalisation.  A state which is exposed as having brought about the conflicts in the Middle East where people strive for a Western style democracy whilst battling with systems that were enforced by Western colonial powers in the 20th Century and earlier.

The play is presented on an open stage strewn with the rubble and detritus of revolution and backed by a wall-collage of torn clothes onto which graffiti and satirical YouTube puppet shows are projected. Given a larger budget this could have been more successfully realised and design elements could have knitted together the wide range of characters and locations that are covered in the play.  Having said this, the puppet ‘girl’ which appears throughout and is a consistently haunting presence functions as a continuous thread and comes, by the end of the piece, to represent the hopes and fears for the next generation.

The production was a thought provoking and timely piece on the contribution and experiences of women during the uprisings and the aftermath of the Arab Spring. Kay Adshead and her company Mamma Quilla respond to current events in a way that highlights the often forgotten and overlooked experiences of women, bringing much needed attention to the contribution made by women to era defining world events.

Posted by discussionsonfilm at 16:41 No comments: